Let It Ride Poker or simply let it ride is Poker in a simplified form and you are not playing against other players which removes the bluffing element as well as your chance of losing to a far more experienced player. For this reason alone it would be an ideal way to start learning poker but it also happens to be great fun and it can be played quickly unlike some poker games where players regularly take far too long to make decisions. The learning process involves the value of the hands relative to each other but also the frequency with which certain hands appear. 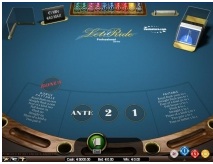 There will be spaces available for four bets which are:- the Ante which can also be marked with a $ sign, bets 1 and 2 and then somewhere on the table will be an opportunity to make a “bonus” bet which is described in more detail later. As the game is played against the house, although the house does not actually have a hand, and winners are paid at fixed odds, the table should also display the payout odds for the various hands. Only a single deck of 52 cards is used which is shuffled after each hand making card counting worthless.
The simple objective of the game is to form a 5 card poker hand of one pair of tens or better. If you are successful you win and you will be paid out against fixed odds displayed on the table. The fact that a winning hand cannot be beaten by a better hand is also comforting for some players

How to play Let it Ride

Whilst the basic principles remain the same each and every casino may have a slightly different layout of the table so we always recommend that you read the instructions before playing or as an alternative try Let it Ride in the free play area of the online casino before risking your cash.
Your first task is to select the stake that you wish to play for which you can do by selecting a value for your chips. Each hand is played independently so you can vary your stake per hand according to how you feel. There will of course be minimum and maximum stakes for the particular table you have selected. You are now ready to place your bets but unusually you need to place three bets at the start of the hand. The same size bet must be placed on each of the three main betting areas (ante, 1, 2). This is done automatically for you in an online casino so you only need to place a bet on Ante and magically your stack will be reduced. At this time you can also choose to place a Bonus bet which can also be known as a Side Bet which is explained in more detail later.
After the bets have been placed the dealer will deal three cards to you and two cards to a common area on the table. The two cards in the common area are called the Community Cards and they are dealt face down. In a land based casino there could be more players sitting around the table so the first three cards for each player would also be dealt face down but in online casinos you will be the only player so the cards are face up. The idea is now to make a 5 card poker hand from the three cards that you have and the two community cards which are still face down.
At this point you have to assess your chances of creating a winning hand not forgetting that a winning hand is a pair of tens or better. If you already have better than a pair of tens in the three cards that you can see the decision is very simple but mostly you will need to use the two community cards. If at this point you assess your chances as positive you simply allow your bet 1 to stand or indeed to let the bet ride which is where the name of the game comes from. If on the other hand you do not fancy your chances you simply take back bet 1 leaving your ante and bet 2 on the table.
Once this decision is made the dealer will then turn over one of the two community cards and the process repeats itself..
You can now see four cards which gives you a better idea of whether you can form a hand of tens or better and you have the chance to withdraw bet 2 or Let It Ride again.
You cannot alter your decision about bet 1 but you can withdraw or let ride bet 2 no matter what you did for bet 1. You could for example have withdrawn bet 1 but like the community card that was turned over and decide to play on with bet 2.
After your second decision the second community card will be revealed and you can see your hand. If you have a winning hand it will be paid out according to the odds stated on the table and against your ante and any other bets still on the table. If you withdraw both your bets 1 and 2 the hand is over and you lose your ante without the second community card being revealed.

A word of caution
Odds paid are not always the same in every online casino and this is particularly true for the better hands so before you start check the odds on the table you are playing. It is also possible for there to be a maximum payout on the table so make sure that you keep your bets low enough to ensure that your maximum win will not exceed the limits. Nothing will make you more annoyed than getting a royal flush and not receiving full credit.

The order of hands in Poker

Poker hands are listed here starting with the lowest and ending with the highest.
ONE PAIR: This is two cards of the same value; for example: two 6s or 2 Jacks. Aces are the highest pair followed by Kings, Queens, Jacks etc down to a pair of 2s. Remember though that anything less than a pair on tens is not a winning hand in Let it Ride.
TWO PAIRS: This is self explanatory in that four of your cards combine to form two separate pairs. Two pairs of any value is a winning hand in Let it Ride and the payout is the same regardless of the value of the pairs.
THREE OF A KIND: This is similar to a pair except that you have three cards of the same value instead of two; for example three 5s or three Kings. The highest three of a kind is Aces but any three of a kind pays the same odds.
STRAIGHT: A straight is simply five cards that are in running order but are not all of the same suit. An example would be four, five, six, seven and eight. You can have up to four cards of the same suit but not five as that would be a far better hand as described later. An Ace can count high or low so Ace, two, three, four, five is a winning hand as is ten, Jack, Queen, King, Ace.
FLUSH: A flush is any five cards which are of the same suit (Hearts, Clubs, Diamonds, Spades).
FULL HOUSE: Not that obvious from the name but a full house uses all five cards and is a hand comprising a Pair (see above) and a Three of a kind (see above). In normal poker the value of the three of a kind determines the value of the hand but in Let it ride and full house pays out at the declared odds.
FOUR OF A KIND: As you might expect, this is four cards of equal value; for example: four 6s or four Queens.
STRAIGHT FLUSH: This is a combination of a Straight and a Flush so it can be described as a Straight where the cards are all the same suit or as a flush where the cards are in sequence; either way it is a strong hand.
ROYAL FLUSH: This is the highest possible hand and is simply a Straight Flush but the cards are ten, Jack, Queen, King, Ace or in other words the highest straight flush possible.

The Bonus Bet: It was mentioned earlier that you can place a “Bonus bet” sometimes known as a “Side bet”. This bet will usually win out if you achieve a Straight or better but rules can be different in different casinos and the payout odds can also vary so check your casino rules before placing this bet. This is somewhat similar to a jackpot bet in other games where your chances are small but the winnings are large.
Enjoy the game.